DONALD Trump said the raid that killed Abu Bakr al-Baghdadi was like “watching a movie” as live footage was beamed to the White House. The President described in vivid detail the daring night time operation by special forces troops who stormed the lair of the world’s most wanted terrorist. Trump said after a round of […]

DONALD Trump said the raid that killed Abu Bakr al-Baghdadi was like “watching a movie” as live footage was beamed to the White House.

The President described in vivid detail the daring night time operation by special forces troops who stormed the lair of the world’s most wanted terrorist.

Video posted on a militant website April 29, 2019, shows al-Baghdadi at a secret location with a weapon by his side[/caption]

Trump said after a round of golf in Virginia, he sat down in the White House at around 5pm on Saturday night to watch the operation.

Moments after they sat down, US military personnel and military dogs lifted-off in eight helicopters from an unidentified military base in the Middle East, according to Trump.

The helicopters were reportedly carrying between 50 and 70 soldiers from the US Army’s Delta Force and Rangers and flew fast and low for an hour on their approach to al-Baghdadi’s compound.

As they swooped down, the helicopters came under gunfire which they were able to quickly suppress and land safely.

Believing the main compound door to be booby trapped, they entered in just seconds by blasting through the wall, said Trump.

“We were getting full reports on a minute-by-minute basis,” he said, adding it was “as though you were watching a movie”.

US forces quickly cleared the compound “with people either surrendering or being shot and killed,” said Trump.

US soldiers captured and later imprisoned several Islamic State fighters while 11 children were removed, uninjured, and taken into care.

The 48-year-old Baghdadi fled into a subterranean area of the complex and into a tunnel, dragging three of his young children with him.

Esper said US forces called for him to surrender but the world’s most wanted man refused and was chased by the dogs but ran into a dead end. 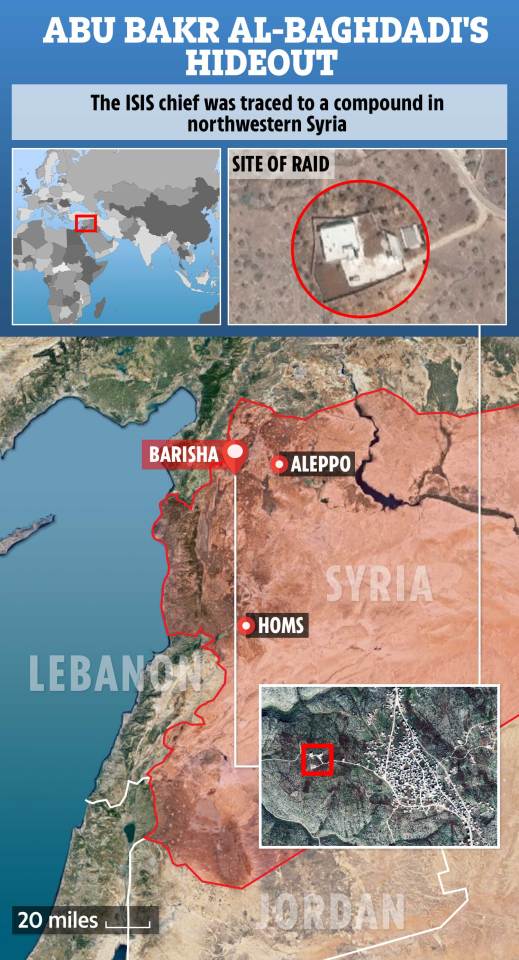 The scene of where Baghdadi is believed to have blown himself up, in northwestern Syria[/caption]

Trump said that a “whimpering and crying and screaming” Baghdadi ignited his suicide vest, killing himself and his children and causing the tunnel to collapse.

Video taken by the troops shows a large fireball light up the night sky as the terror chief met his end.

No military personnel were hurt although one dog was badly injured.

With Baghdadi’s body “mutilated by the blasts” DNA tests taken onsite were used confirm his identity in around 15 minutes.

“The test results gave certain, immediate and totally positive identification. It was him,” said the President.

A Turkish official said that he believed al-Baghdadi had arrived at the compound 48 hours earlier with his children and two wives.

The women were reportedly wearing explosive devices and are now assumed to be dead.

The United States began to receive intelligence on the whereabouts of Baghdadi around a month ago, including some “helpful” information from the Kurds, said Trump.

Intelligence officials were able to “scope out” his exact location two weeks ago, while Trump himself became aware of the planned raid three days ago.

The Kurdish-led Syrian Democratic Forces said the raid was a culmination of a five month joint intelligence operation with the Americans.

He released a picture  of himself with O’Brien, Esper and Chairman of the Joint Chiefs of Staff U.S. Army General Mark A. Milley, and Brig. Gen. Marcus Evans, Deputy Director for Special Operations.

The picture echoes the famous image of Obama and officials watching the operation to kill bin Laden as it happened.

US President Barack Obama, second from left, and Vice President Joe Biden, left, along with members of the national security team, during the mission against Osama Bin Laden in the Situation Room of the White House on May 1, 2011[/caption]

WHO WAS THE ISIS CHIEF?

Al-Baghdadi – whose real name is Ibrahim Awad Ibrahim – is thought to have been born in Samarra, north of Baghdad, in 1971.

Reports suggest he was a cleric in a mosque in the city around the time of the US-led invasion in 2003.

Some believe he was already a militant jihadist during the rule of Saddam Hussein.

Others believe he was radicalised during the four years he was held at Camp Bucca, a US facility in southern Iraq where many al-Qaeda commanders were detained.

In October 2011, the US officially designated Baghdadi as ‘terrorist’ and offered a $10million reward for information leading to his capture or death. This was increased to $25m in 2017.

Baghdadi is credited with transforming the breakaway al-Qaeda group and turning it into the independent ISIS group.

Under his leadership, the group spearheaded a militant offensive that expanded into Syria in 2013 and which later overran much of Iraq’s Sunni Arab heartland.

In July 2014 he climbed the pulpit of Mosul’s medieval al-Nuri mosque in black clerical garb during Friday prayers to announce the creation of the caliphate in areas of Syria and Iraq.

In 2015, he was reportedly severely injured in an airstrike in western Iraq, and he was possibly even killed a few years later according to Russian officials.

He has also been heard in a number of audio messages to followers, including an 18-minute speech given earlier this year.