Texas shooting – what we know about the mass shooting

TWO have been confirmed dead and dozens of other people are reported to have been injured after a gunman opened fire during a Halloween party in Greenville, Texas. The party is thought to have been attended by university students with US cops saying the gunman is still at large. Read on to find out everything […]

TWO have been confirmed dead and dozens of other people are reported to have been injured after a gunman opened fire during a Halloween party in Greenville, Texas.

The party is thought to have been attended by university students with US cops saying the gunman is still at large. Read on to find out everything we know about the shooting. 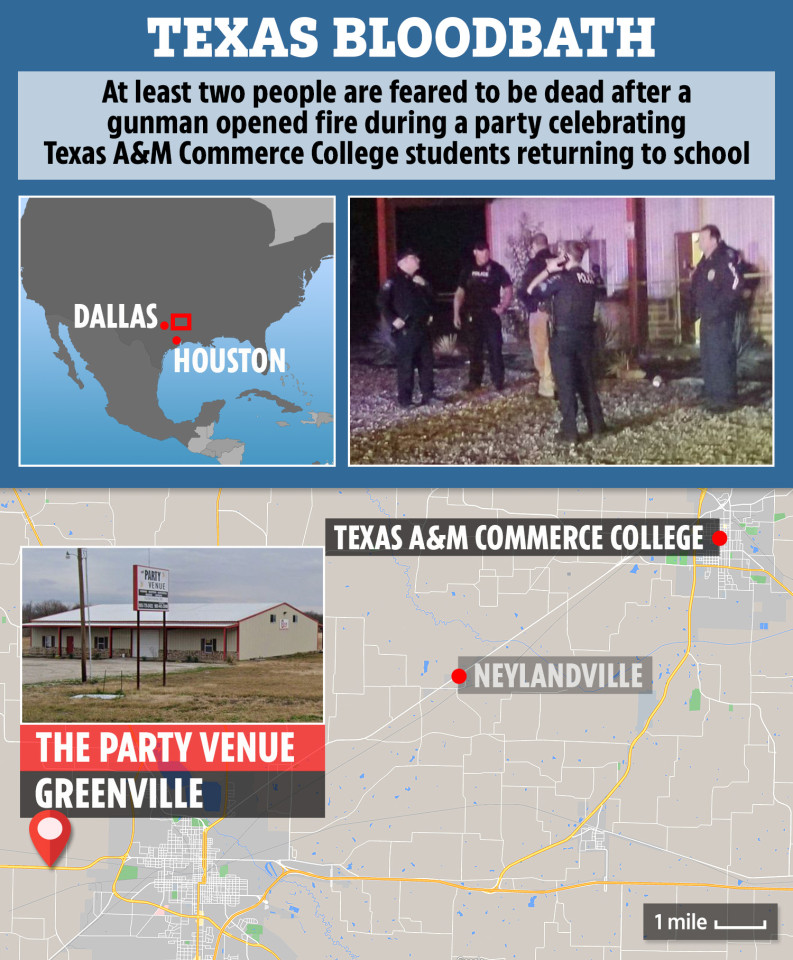 Police were called to the scene The Party Venue in Greenville, near Dallas, where Texas A&M Commerce College students were celebrating coming back to school to investigate reports of illegal parking at about 11.30pm local time.

Police said after about 15 minutes they started to hear gunshots and then called for back up.

Hunt County Sheriff Randy Meeks told reporters it was “complete chaos” and police were not able to identify the shooter – who is still at large.

The event was a Halloween party called #Twerkortreat and was not a sanctioned event by the university – which is 16 miles away from where the shooting happened.

Chief Deputy Buddy Oxford told reporters they first thought the shooter used a semi-automatic rifle because they found rifle casings on the floor.

The casings turned out to be Halloween props and now police say the shooter used a 9mm handgun.

It is thought there were hundreds of students inside at the time of the shooting, with the university releasing a statement saying their “thoughts and prayers are with the victims, families, and friends of those affected by this morning’s shooting.”

Have there been any arrests?

Police are yet to make any arrests in connection with the incident.

They said that witnesses have been uncooperative, making it difficult to find out who the shooter is and what their motive was.

Meeks said: “It appals me that, as many folks that were there, (they) have not been able to give us a better description of this shooter.

“Due to the many different descriptions being provided by those in attendance at that party, we unfortunately do not have any solid suspect information to provide at this time.”

The shooting happened at The Party Venue in Greenville, near Dallas[/caption]

What happened at the vigil?

Officers responded to a shooting at vigil held for the two victims at 8pm local time on October 27.

Dallas police spokeswoman Tamika Dameron said there were no injuries were reported in the shooting, but several vehicles were damaged.

Who are the victims?

Original reports suggested between 10 and 20 people were injured.

A total of 16 people were injured and three of those people were taken to a local trauma hospital by air ambulance.

Other victims suffered cuts and injuries trying to escape the venue through the windows.

One patient is in critical condition.

A police scanner reported at least one person was shot in the neck.