TWO people are dead and multiple others have been injured after a gunman, is still on the run, opened fire at an unsanctioned university Halloween party in Texas, police said. Emergency services raced to the scene in Greenville, near Dallas, where Texas A&M Commerce College students were celebrating coming back to school following reports about […]

TWO people are dead and multiple others have been injured after a gunman, is still on the run, opened fire at an unsanctioned university Halloween party in Texas, police said.

Emergency services raced to the scene in Greenville, near Dallas, where Texas A&M Commerce College students were celebrating coming back to school following reports about cars being illegally parked along the highway.

Police were there for about 15 minutes before they started to hear gunshots – it is not clear if the two incidents are related.

He said a total of 16 people sought medical treatment for various injuries including getting cut by glass while running out of the venue.

Mr Oxford said his identity is unknown and there is not clear motive at this time.

He added that a fraternity organised the event and a description of the shooter is not yet available because witnesses are not being cooperative by saying they didn’t see anything. 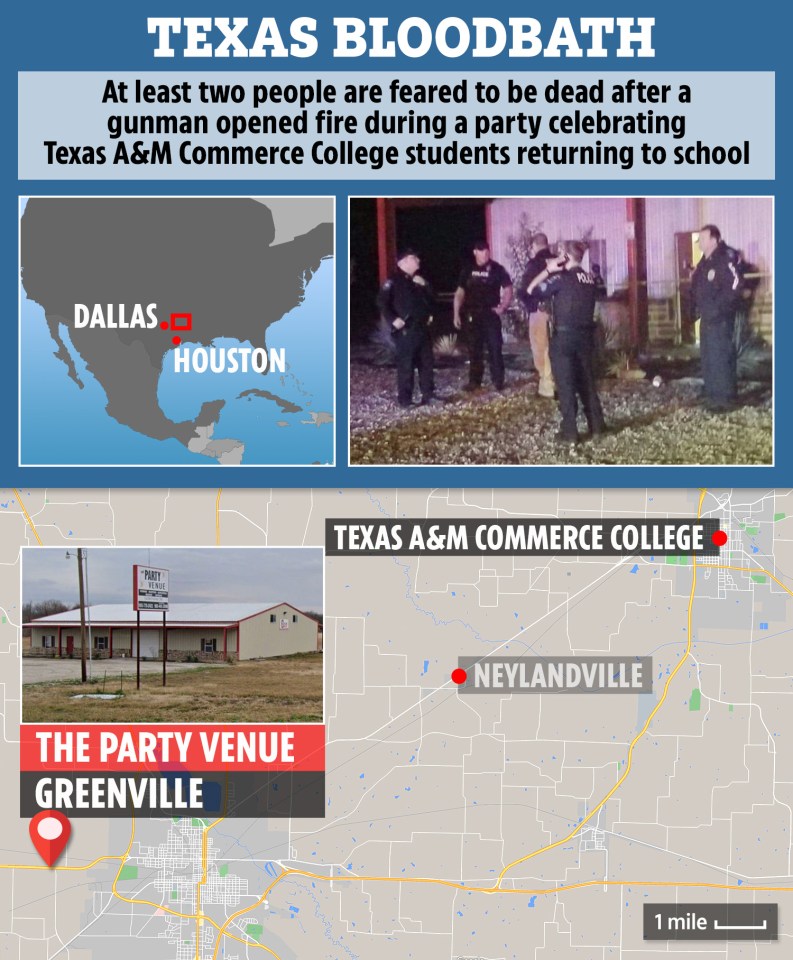 Mr Meeks said the scene was “completely chaos” as investigators found rifle shell casings that later turned out to be Halloween props.

Both Mr Meeks and Mr Oxford said in separate news conferences that scene was chaotic as hundreds of people starting running out of the building, making it difficult for deputies to locate the shooter.

When the shooting ended, officials said deputies found two people dead inside and more than a dozen others wounded.

The two victims have not been identified yet.

Hunt County Police said three victims were airlifted to a local trauma hospital and other victims were taken to Greenville, Quinlan and Commerce hospitals.

Police did not fire their weapons because they never saw the gunman, Mr Oxford said.

Graphic video shared online shows bodies strewn on the floor in a pool of blood and at least one person receiving CPR as people can be heard screaming the background.

Previous reports suggested anywhere between 10 and 20 people had been injured.

It is thought there were hundreds of students inside The Party Venue at the time of the shooting and more than 100,000 students were at a college American football game earlier that day.

The event was a Halloween party called #Twerkortreat and was not a sanctioned event by the university – which is 16 miles away from where the shooting happened.

The university said in a statement: “Our thoughts and prayers are with the victims, families, and friends of those affected by this morning’s shooting in Greenville, Texas.”

A police scanner reported at least one person was shot in the neck.

Hunt County Police have not made any arrests.

For the latest news on this story keep checking back at Sun Online, where we will bring you live updates as soon as they happen, before anyone else.

TheSun.co.uk is your go to destination for the best celebrity news, football news, real-life stories, jaw-dropping pictures and must-see video

I Cannot Wait To Fall Madly In Love – Toke Makinwa