UP to 150 migrants are feared dead after the boats they were travelling in capsized in the sea off Libya. Ayoub Gassim, a spokesman for Libya’s coast guard, said that two boats carrying around 300 migrants capsized around 75 miles east of the capital, Tripoli. Around 137 migrants were rescued and returned to Libya, he […]

UP to 150 migrants are feared dead after the boats they were travelling in capsized in the sea off Libya.

Ayoub Gassim, a spokesman for Libya’s coast guard, said that two boats carrying around 300 migrants capsized around 75 miles east of the capital, Tripoli. 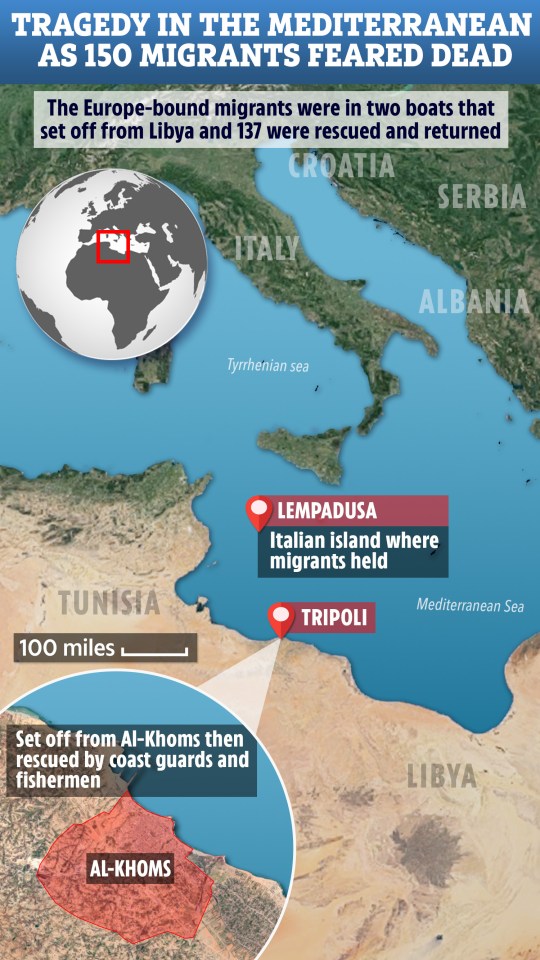 Around 137 migrants were rescued and returned to Libya, he said, and the coast guard has recovered just one body so far.

Charlie Yaxley, a spokesman for the UN refugee agency, said: “We estimate that 150 migrants are potentially missing and died at sea.”

The migrants set off from the town of Al-Khoms in the war ravaged North African country.

If the death toll is confirmed then it would be the deadliest shipwreck in the Mediterranean this year.

After the uprising that toppled and killed Muammar Gaddafi in 2011, Libya became a major conduit for African migrants and refugees seeking a better life in Europe.

Every year thousands of migrants attempt to cross the Mediterranean to Europe every year with Libya the main point of departure.

Traffickers and armed groups have exploited Libya’s chaos since Gaddafi’s overthrow, and have been implicated in widespread abuses of migrants, including torture and abduction for ransom.

In the first three months of 2019, some 15,900 refugees and migrants arrived in Europe via Mediterranean routes – a 17 per cent decrease on the same period in 2018.

Around 1800 migrants died on the route last year and the UN refugee agency says 164 migrants have died travelling from Libya to Europe since the start of the year.

Earlier this week, the Libyan coast guard intercepted around three dozen migrants off the coast and took them to a detention centre near Tripoli where an airstrike killed more than 50 people earlier this month.

Over 200 detainees are still being held at the Tajoura detention centre, near the front lines of fighting between rival Libyan factions. The U.N. has expressed concern for their safety.

In recent years the European Union has partnered with the coast guard and other Libyan forces to prevent migrants from making the dangerous journey by sea to Europe.

Many of the migrants end up on the Italian island of Lempedusa, where they are then transferred to the mainland.

The issue of migration has become and huge political issue in Italy.

At the end of last month captain of a migrant rescue ship the Sea-Watch was arrested by the Italian authorities after docking on Lempedusa.

UK's hottest July day ever at 38C! How we kept cool from serious to silly

Cops smash into blazing hot cars to save dogs left inside in 33.5C heat

Carola Rackete defied warnings from Salvini and rammed a border police boat blocking the path to the port.

The risks that migrants take to reach Europe was was brought to the world’s attention by the death of Syrian boy Aylan Kurdi.

A haunting picture showed the lifeless body of the three-year-old being lift from a Turkish shore.