BASKETBALL ace Lebron James and YouTube star Jake Paul are among the celebrities who have had to evacuate their homes as a bush fire edges closer to Los Angeles James, 34, who plays for the LA Lakers and is widely considered one of the best players of all time, said on Twitter he had to […]

James, 34, who plays for the LA Lakers and is widely considered one of the best players of all time, said on Twitter he had to “emergency evacuate my house”.

He wrote: “Had to emergency evacuate my house and I’ve been driving around with my family trying to get rooms. No luck so far!”

Although later he tweeted he had managed to find somewhere and sent his prayers to “all the families in the area,” urging people to get to safety.

YouTube star Jake Paul, 22, was also affected with his wife Tana Mongeau tweeting that there were fires by her house, having already been affected by the fires last year.

She wrote: “OMG guys there’s fires by my house again and everyone’s freaking out.”

The bush fire is threatening some of Los Angeles’ most affluent neighbourhoods.

The fire broke out along the 405 Freeway near the Getty Center at around 2am (local time) on Monday and is spreading to the south and west.

The cause of the fire is not yet known.

The Getty Center is located in the Brentwood neighbourhood of Los Angeles and houses a vast collection of paintings and sculptures, including Vincent Van Gogh’s famous Irises and Paul Gaugin’s Arii Matamoe.

A mandatory evacuation zone covering 400 acres and 3,300 homes has been imposed with the zone stretching from Mulholland Drive in the north and Sunset Boulevard in the south.

Mount St Mary’s University was also surrounded by the fire and needed to be evacuated.

A campus spokeswoman though said all 450 students had been taken to safety. 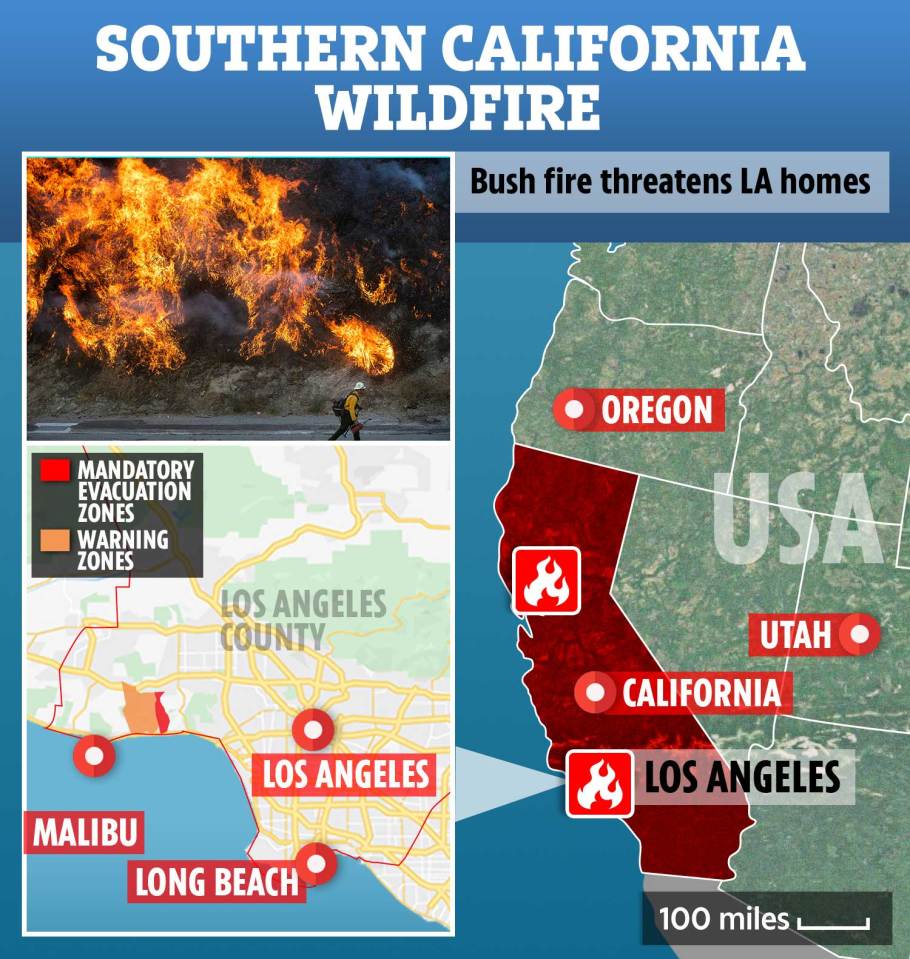 aren’t no joke. Had to emergency evacuate my house and I’ve been driving around with my family trying to get rooms. No luck so far!

omg guys there’s fires by my house again and everyone’s freaking out and it inspired this storytime:

Mayor Eric Garcetti said some homes had already been lost and urged residents to leave as soon as possible if they lived in the mandatory evacuation zone.

He added that some residents only had 15 minutes to flee.

He said at least two homes have burned down.

The LA Fire Department said: “We have an active and growing brush fire.

“For those living in this area, you must be prepared to evacuate.”

“This is a very dynamic situation due to high winds and information is quickly developing. Stay vigilant.”

Large parts of northern and southern California are currently being devastated by wild fires, with the flames being whipped up by hurricane-force winds.

The Kincade fire in the north has now burned more than 54,298 acres in Sonoma County, north of San Francisco, since Wednesday.

That fire is reported to be between five and 10 percent contained, and, on Sunday, Sonoma County Sheriff’s Office declared that around 90 to 95 percent of people in mandatory evacuation zones are now fleeing.

The evacuation zone stretched from the vineyards of Sonoma County to the coastal area of Bodega Bay.

More than 3,000 firefighters are tackling the Kincade fire alone.

Governor Gavin Newsom estimated that the Kincade fire had led to evacuation orders for around 180,000 residents, while CalFire says it has destroyed 94 structures and damaged 17 more.

The Tick fire has ravaged more than 4,600 acres.

most read in world news

Can you spot the cat among the pigeons – and beat the 18 second challenge?

Around 1,000 firefighters are working to tackle the Kincade fire alone.

Nearly all the 50,000 residents were ordered to evacuate, but were able to come back home after the winds died down.

Pacific Gas & Electric said Sunday that it had shut off power to 960,000 homes across northern California, affecting 2.4m people.

Make That Call, Forgive That Person, No One Is Promised Tomorrow – Davido

How I Turned Tunde Ednut From Hunter To Hunted: Speed Darlington