VILE trolls are mocking Brit travel blogger Jolie King after she was jailed for flying a drone in Iran – while trying to prove the country is safe for visitors. Abusive comments online – some posted from Iran – slam her and Aussie boyfriend Mark Firkin for having a “white saviour complex” and say they […]

VILE trolls are mocking Brit travel blogger Jolie King after she was jailed for flying a drone in Iran – while trying to prove the country is safe for visitors.

Abusive comments online – some posted from Iran – slam her and Aussie boyfriend Mark Firkin for having a “white saviour complex” and say they were “asking for trouble”.

The globe-trotting pair travelled across Asia, including the Hunza Valley in Pakistan[/caption]

One unsympathetic comment from Iran said: “Cry me a river. Iran has every right to arrest anyone who violated the law particularly that puts their interests at risk.

“If she did that in Israel, US, she might have been raped and killed even without any trace of her.”

Another Iranian critic said: “You’re just asking for trouble. They knew very well it was illegal, and still chose to be the typical ‘white tourists who break the rules’.. well now you face the consequences.”

Getting arrested in Iran. Anything for the gram … Can you post a video of your arrest?

A third Iranian troll said: “If you don’t respect the law, you get arrested in civilised part of the world. Don’t fly drones without permission and licence particularly over military region. IRGC did a good job.”

Vile comments also came from people in other countries, including one who wrote: “The white saviour complex in action.”

And an American man wrote: “Wow it’s the privilege that really gets me.”

One sick troll joked: “How’s the hotel?” and another asked the young couple: “Why do you look like classic low level spies though?”

But other commenters defended the pair, including some apparently posting from Iran who hit out at the fanatical regime.

The white savior complex in action … it’s the privilege that really gets me.

One said: “Don’t worry they are safe and will return home soon. News say they were filming a drone in military area. They probably didn’t realise it, the government is very sensitive on these issues. I think aerial filming in military areas in any country is forbidden.

“We are also saddened by this but don’t worry they are safe and will return home soon just send good vibes.”

One woman cautioned: “Let this be a cautionary tail that you must be careful when travelling to foreign countries that you must know all their laws and customs because you never know what they may find issue with.

“Here in the state we laws against drones but I’m not sure how it works everywhere else. I hope the government chalks throw up to two young adults making a unintentional mistake with no malicious intent and let them go.” 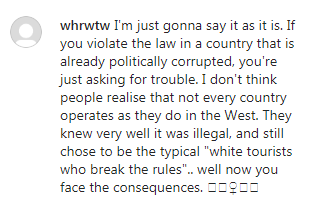 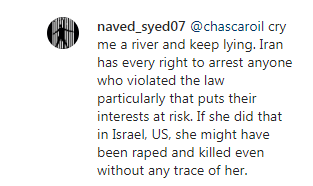 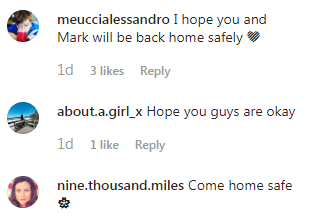 Jolie and Mark said they quit the “9-5 grind” in Perth, Australia, to drive across the world from Australia to the UK, where her dad Mike King was born and raised in Essex.

They set off in 2017 and had been documenting their travels around the world on social media and raising money on crowdfunding site Patreon.

But their dream trip turned into a nightmare when they were detained near Iranian capital Tehran for allegedly flying a drone without a licence.

Jolie is now being held in the notorious Evin jail described as a “black hole of evil” amid claims of torture and brutality from the guards.

Before their arrest in Iran, a paranoid pariah state for the last 40 years, Jolie and Mark appeared to be enjoying their adventures.

Living out of their Toyota Land Cruiser, they had visited exotic South East Asian islands such as Timor, Flores and Sumbawa.

They also ventured to Malaysia, India and finally Pakistan before heading towards the Islamic Republic of Iran – which executes more people per capita than any other country in the world.

In blog posts, the pair said wanted to show supposedly dangerous countries are safe for visitors.

The couple wrote online: “Our biggest motivation behind the vlogs is to hopefully inspire anyone wanting to travel.

“And also try to break the stigma around travelling to countries which get a bad rap in the media.”

Their blog and YouTube channel, which has over 22,000 subscribers, are both called The Way Overland.

The couple posted a video on June 30 on their first day in Iran.

But pals raised concerns when they stopped hearing updates from Jolie and Mark a few weeks ago.

Iranian authorities told Jolie she was being held in the hope of a prisoner swap, according to The Times.

The Australian reports that Negar Ghodskani, 40, who is facing jail in the US, is the woman Tehran want to exchange with the Brit blogger.

Jolie is locked up in the same wing as Nazanin Zaghari-Ratcliffe, a 41-year-old British-Iranian mum-of one, held at the jail since 2016 on spying charges.

It is claimed they are being used as additional collateral after a proposed swap for Ghodskani and Zaghari-Ratcliffe failed.

A second unnamed British-Australian woman was also arrested in a separate incident.

The woman, an academic, is said to be held in solitary confinement and been sentenced to ten years in jail for an unknown offence, a source told The Times.

It is believed Jolie is the first UK citizen without an Iranian passport to be jailed in Iran in recent years.

Prisoners say cells in the prison are filthy, overcrowded and infested with beetles, comparing it to torture chamber.

The Australian government is taking the lead in both cases, with Britain urged to act.

Boris Johnson is set to confront Iran about the arrested Brits at a UN meeting in New York this month.

In a letter to families of three Brits held in Iran, seen by The Times, Foreign Secretary Dominic Raab said: “We will not accept Iran using our citizens as diplomatic leverage.”

Ben Wallace, the defence secretary, said: “The message to Iran is to follow the international rule of law, and to release people that have been detained in the way they have been over the last couple of years.”

It comes amid escalating tensions between Britain and Iran, as Dominic Raab, the foreign secretary, claimed a tanker seized in Gibraltar has now delivered its oil to Syria.

How plague of false widow spiders are crippling Brits – so are YOU at risk?

Mr Raab said that the Adrian Darya-1’s oil was transferred in breach of EU sanctions.

The 15,000-tonne ship was seized by a team of Royal Marines as it passed through the British territory’s waters on July 4 for trying to bust European sanctions and take oil to Syria.

Iran is preparing to release a British tanker that was seized in retaliation.

The Stena Impero was boarded in the Strait of Hormuz.