IRAN has used bulldozers to clear debris from the plane crash site while slamming the “big lie” that they shot it down. The Ukrainian passenger jet came down hours after Tehran launched a barrage of rockets against US targets in Iraq – leading to fears jittery air defence troops targeted it by mistake. And after […]

IRAN has used bulldozers to clear debris from the plane crash site while slamming the “big lie” that they shot it down.

The Ukrainian passenger jet came down hours after Tehran launched a barrage of rockets against US targets in Iraq – leading to fears jittery air defence troops targeted it by mistake.

And after Western governments accused Iran of shooting it down – something the country denies – there are now fears of a cover-up.

Iranian authorities have so far refused to release the black box flight recorders, saying they will “handle” the data themselves.

And bulldozers have now been pictured clearing away debris at the crash site.

It is feared the machines could destroy precious clues as to what really happened before international crash investigators have a chance to examine them.

Iran’s ambassador to the UK today dismissed the use of bulldozers as “absolutely absurd”.

What we know so far:

But the images have been verified by UK investigative website Bellingcat, whose painstaking work linked downed MH17 to Russia back in 2014.

Bellingcat investigator Giancarlo Fiorella told Channel 4 News: “Those images (of the bulldozer) we were able to geolocate to the crash site.

“I found them to be really distressing because this is potentially the scene of a crime.

“If this was a shoot-down event, you don’t want to disturb the crash site before a thorough investigation can be conducted and I’m not sure one had been conducted.”

It follows Iranian claims the two black boxes – which contain data and cockpit communications from the plane and are meant to be indestructible – had been damaged.

Iranian aviation authorities claim parts of their memory had been lost.

Satellite data detected two surface-to-air missiles being launched just minutes after the Boeing 737 took off, the US government says.

And new video shows at least one of the rockets streaking across the night sky in Tehran – before the jet explodes in a fireball killing all 176 people on board.

Analysis of the footage shows the explosion took place near the last known position of the Ukraine International Airlines plane over Parand, southwest of Tehran, at 6.14am on Tuesday.

It shows a bright object moving through the sky before apparently colliding with another object mid-air, causing an explosion.

A brighter streak is seen moving in a different direction – believed to be the flaming wreck of the plane after impact.

An earlier video taken from the security camera on a house shows a huge explosion on the ground and debris flying past the camera.

After US spies told him the plane was shot down, Donald Trump said tonight: “Somebody could have made a mistake”.

Pentagon and Iraqi officials had earlier said they believe the plane had been downed by a missile.

The air tragedy came just hours after Tehran fired at least 15 ballistic missiles at two US bases in Iraq.

Tonight President Trump said jet was “flying in a pretty rough neighbourhood”, adding: “I have my suspicions.”

He said at the White House: “It’s a tragic thing because somebody could have made a mistake.

“Some people say it was mechanical but I don’t think that’s even a question.” 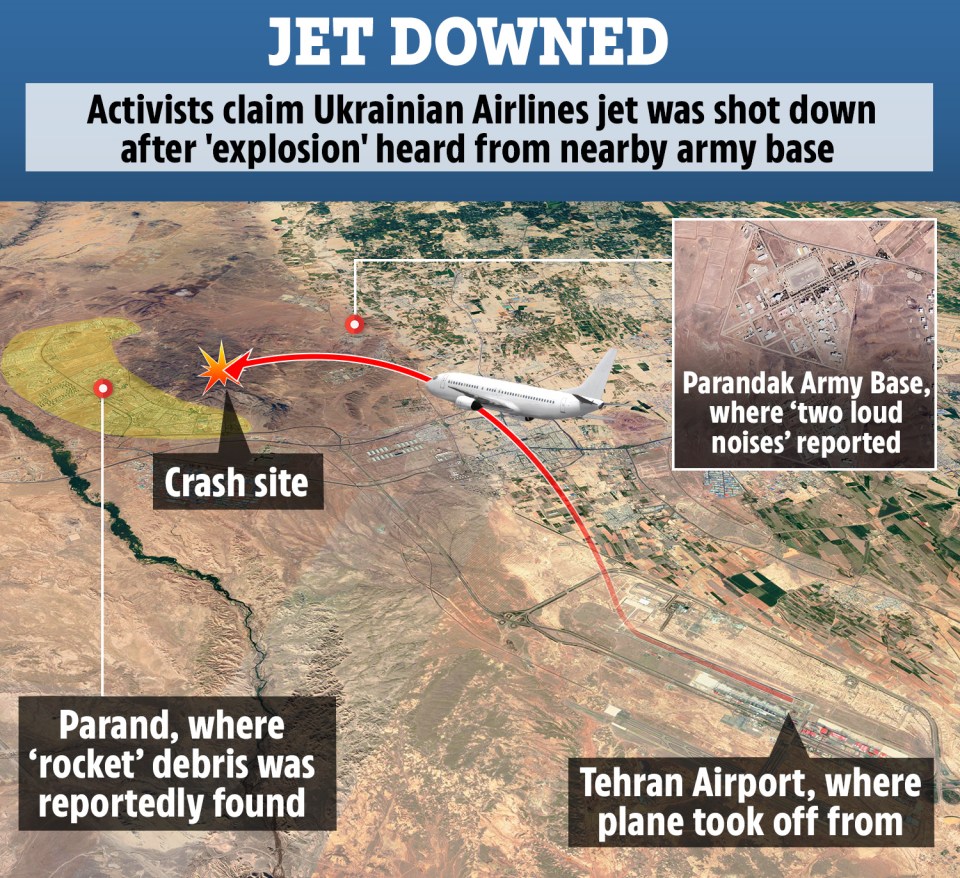 The dead include 63 Canadians and three Britons.

Many of those on board were Canadian-Iranians heading home after visiting relatives over the holiday, including two newlywed couples.

Mr Trudeau described the crash as a “tragedy that not only shocked Canada, but the rest of the world.”

He said: “We have intelligence from multiple sources, including our allies and our own intelligence.

“The evidence indicates that the plane was shot down by an Iranian surface-to-air missile. This may well have been unintentional.

“The news will undoubtedly come as a further shock to the families who are already grieving.”

Mr Johnson said there was “a body of evidence” the plane was shot down by an Iranian missile. He also said it “may well have been unintentional”.

But Iran continued to deny it shot the plane down.

Government spokesman Ali Rabiei said on state TV: “All these reports are a psychological warfare against Iran.

“All those countries whose citizens were aboard the plane can send representatives and we urge Boeing to send its representative to join the process of investigating the black box.”

Unverified pictures earlier shared on social media claim to show parts of an anti-aircraft missile allegedly found near the crash site in Parand.

Ashkan Monfared tweeted the image, which he said was taken “by an amateur who had no knowledge of the significance of the story and did not know what he had found”. 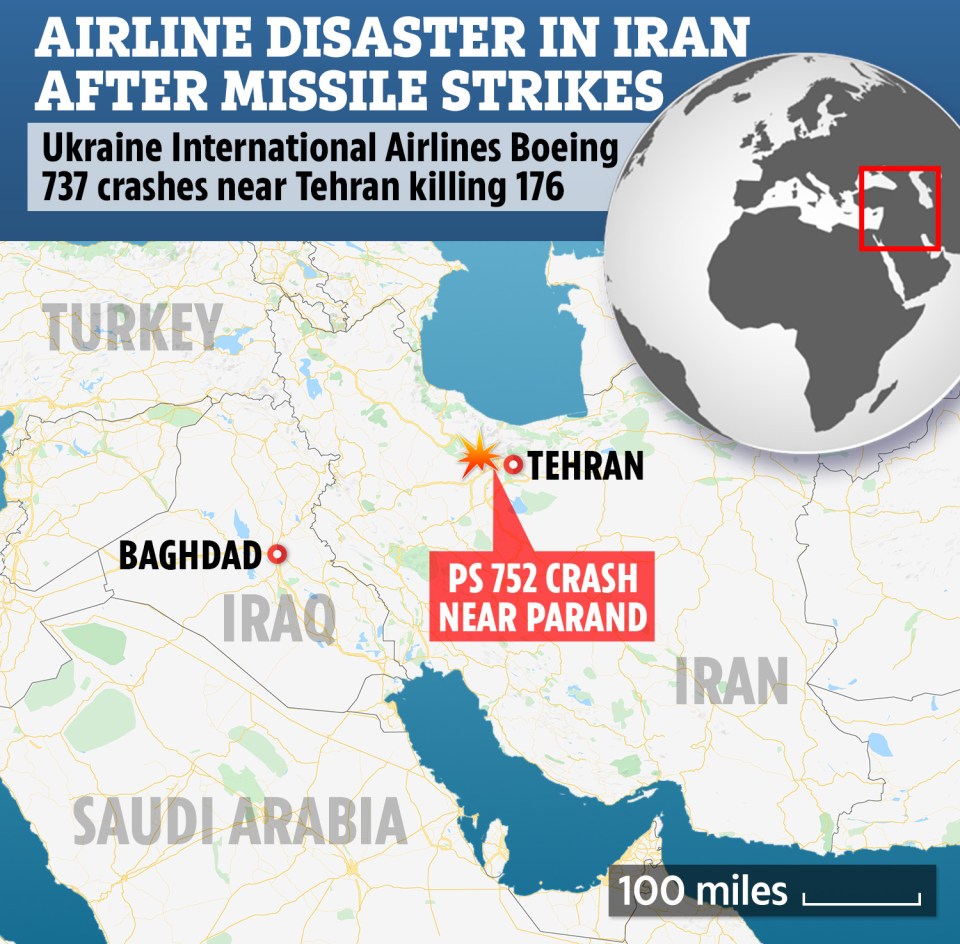 It is similar to the nose cone of a Russian-made Tor surface-to-air missile.

Russia delivered 29 Tor-M1s to Iran in 2007 as part of a $700million contract signed in December 2005. Iran has displayed the missiles in military parades.

Others claiming to live nearby said they heard loud noises coming from Parandak army base at around the time of the disaster.

One wrote of Twitter: “I am a resident of Parand and two to three minutes before the plane crashed two very loud noises were heard from Parandak’s garrison.”

He said: “A strike by a missile, possibly a Tor missile system, is among the main (theories).”

Davido Reacts After Kiddominant, Peruzzi Reveal Songs They Wrote For Him