A MAN who rented an isolated farmhouse where a family were waiting for the “end of the world” has been arrested over claims he imprisoned them in a “secret room”. Dutch cops revealed some of the alleged “doomsday cult” victims can no longer speak properly after their nine-year ordeal and believed there were the only […]

A MAN who rented an isolated farmhouse where a family were waiting for the “end of the world” has been arrested over claims he imprisoned them in a “secret room”.

Dutch cops revealed some of the alleged “doomsday cult” victims can no longer speak properly after their nine-year ordeal and believed there were the only people left on Earth.

The family of six were discovered after the eldest son walked into a bar in nearby Ruinerwold –  about 60 miles north of Amsterdam  – and asked for help.

Jan Zon van Dorsten, 25, escaped and went to the cafe-bar where he downed five beers before raising the alarm.

Officers then found his four brothers and sisters, aged between 18 and 25, along with their father in a hidden basement in the farmhouse, behind a staircase.

A seventh person – Austrian Josef B, 58 – was arrested at the scene. He was later reported to be their former next-door neighbour.

The handyman – known locally as ‘Josef the Austrian’ – is due in court today, October 17.

Following the raid it was discovered the family can barely talk and speak in a bizarre “fantasy language” after their many years in isolation, reports the Mail Online.

Cops had great difficulty understanding the “incomprehensible” victims who slept and ate on the floor of the windowless room, according to local reports.

Officers admit they are becoming increasingly baffled by the case and are not even sure if the family were held against their will by Josef B.

It as also been revealed the arrested man and the family used to live next door to one another for a short while in the town of Hasslet, in the Netherlands.

Former neighbour Sandra Soer told the Mail: “The majority of children born in this house. There was no midwife involved. They all did that themselves.

‘A daughter had a birthday on the same day as my daughter. They often played together. But only in their back garden. The children never went out on the street or came to our house. You’d often see them climbing in the trees.”

According to the Ms Soer, Josef B only lived on the ground floor of the property in Hasslet.

She said he was never friendly and never said hello to anyone, describing him as “mysterious”.

The Austrian’s arrest has shocked locals who believed he lived at the farmhouse alone.

One told Bild newspaper: “The man has renovated all this alone, came with his trailer and building materials. I’ve always wondered ‘how can he do it all on his own?’

“He must have had help, it can not be done on his own.”

Residents also claimed Josef B had surveillance cameras around the property and would  ‘chase’ people away that strayed too close to the house.

The “imprisoned”  family, who survived on vegetables grown on a small patch of land, were rescued after shaggy-haired Jan walked into the bar on Sunday evening. 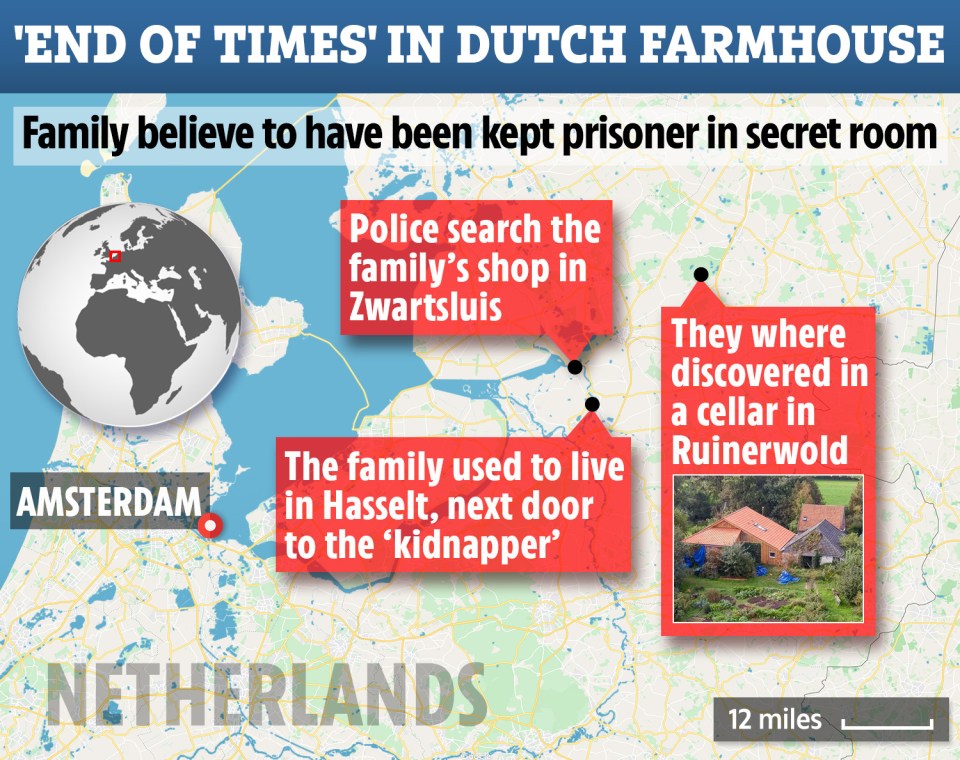 It was apparently his third visit in recent days – but he did not have the courage to speak to anyone on his first two trips.

Owner Chris Westerbeek said: “I had a chat with him and he revealed he had run away and needed help… then we called the police.

“He had long hair, a dirty beard, wore old clothes and looked confused. He said he’d never been to school and hadn’t been to the barber for nine years.

“He said he had brothers and sisters who lived at the farm. He said he was the oldest and wanted to end the way they were living.”

Their mother is believed to have died before they moved there in 2010, said local mayor Roger de Groot – and none of them were registered with authorities.

Some of the younger family members were convinced they were the only humans on earth, according to local reports.

But Jan appears to have had contact with the outside world for several months.

He stopped posting on Facebook in 2010, but started using it again in June when he said he had a new job at a timber company four miles away.

He also posted a selfie on Instagram, showing him sitting among grass and trees with the caption “In Nature”. Other pictures show him with earphones and a laptop.

Police said they found the family in a “small space in the house which could be locked” and that it was unclear whether they were being held against their will.

They lived in a “makeshift living quarters” underground, accessed by a flight of stairs hidden behind a cupboard in the sitting room.

Cruise passenger, 75, jumps to her death from eighth-floor balcony

Body of glamour model, 24, found encased in concrete after being strangled

BEATEN TO A PULP

Officials have not commented on reports that the family may have held “end of days” apocalyptic beliefs.

Drenthe police spokeswoman Grietje Hartstra said: “There is a lot of speculation in the media about what happened, but as police we deal with facts.

“We still have a lot of unanswered questions.”

The family has been living in a secret rooms underground[/caption]

Make That Call, Forgive That Person, No One Is Promised Tomorrow – Davido

How I Turned Tunde Ednut From Hunter To Hunted: Speed Darlington