DONALD Trump revealed his touchy-feely side today when he gave a 94-year-old D-Day veteran a warm hug and branded him a “tough guy”. The US President, 72, gave Private Russell Pickett a warm embrace while he was attending a ceremony at the US cemetery in Colleville-sur-Mer in Normandy as part of the events marking the […]

DONALD Trump revealed his touchy-feely side today when he gave a 94-year-old D-Day veteran a warm hug and branded him a “tough guy”.

The US President, 72, gave Private Russell Pickett a warm embrace while he was attending a ceremony at the US cemetery in Colleville-sur-Mer in Normandy as part of the events marking the 75th anniversary of the landings which launched the Allied offensive during World War II.

Mr Pickett was just 19 when he was part of Company A, 116th Infantry which was part of the elite US troops which landed on Omagh beach during the first wave of the landings.

Those taking part in the initial landings on D-Day were known as the “suicide wave” due to the heavy losses the troops suffered during heavy fighting with the Nazi forces.

It is said half of those that landed in the initial wave lost their lives in the bid to liberate northern France.

Mr Pickett, was injured by German gunfire when he ran onto the sand and still suffers from post-traumatic stress disorder.

During a speech at the cemetery, Mr Trump said: “Russell Pickett is the last known survivor of the legendary company A.

“Today, believe it or not, he has returned once more to these shores to be with his comrades. Private Pickett, you honour us all with your presence.”

Mr Pickett had been on stage during the ceremony along with other World War II veterans, Mr Trump, First Lady Melania as well as the French President Emmanuel Macron and his wife Brigitte Macron.

When Mr Trump singled Mr Pickett out, the French President helped the vet to his feet before Mr Trump gave him a hug and whispered in his ear.

Back in 2016 Mr Pickett told his local ABC news station about the high casualty rate his company suffered as part of the “suicide wave”. 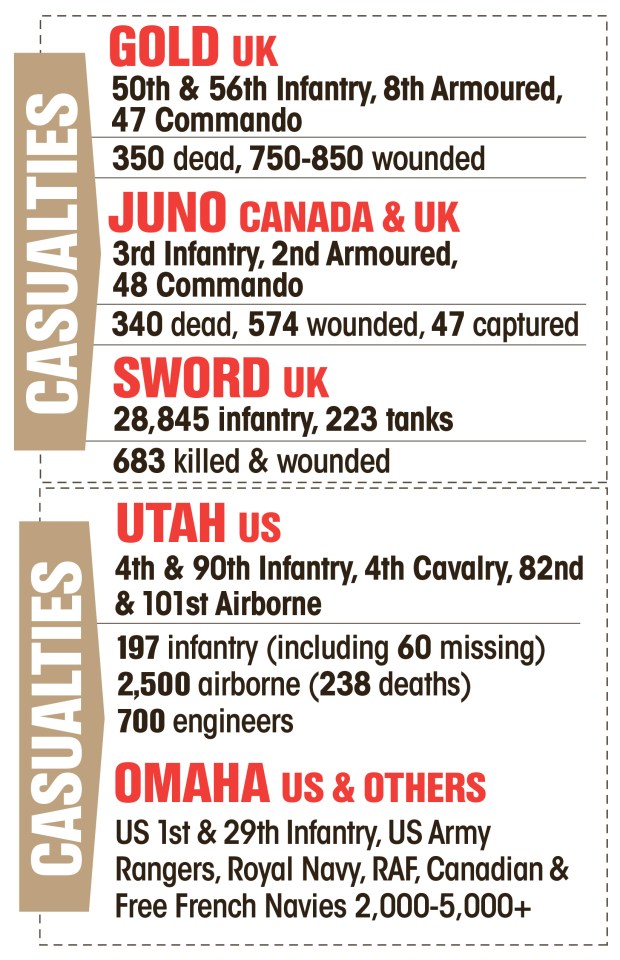 Pickett was on aHiggins boat, armed with a flame thrower when his vessel was hit.

He added: “I tried to get up and my legs wouldn’t work. I wasn’t hurting anywhere, scared to death of course which that might have been what was wrong with me.”

Mr Pickett wasn’t the only person Mr Trump singled out during his speech and recognised several of the veterans by name who were attending.

The President also mention Arnold Raymond ‘Ray’ Lambert, a former Army medic who served with the 16th Infantry Regiment, part of the US Army’s First Division, known as “The Big Red One”.

Mr Trump said: Ray was only 23 but he had already earned three Purple Hearts and two Silver Stars fighting in North Africa and Sicily where he and his brother Bill, no longer with us, served side by side.”

June 6, 2019 marks the 75th anniversary of the D-Day landings in Normandy when more than 160,000 servicemen began the push to liberate France.

Ships gathered in the middle of the English Channel at point called Piccadilly Circus before making their way to the Normandy beaches.

Paratroopers land behind enemy lines before the main assault begins with British soldiers tasked with securing the Benouville bridge on the Caen canal with Lieutenant Den Brotheridge leading the charge.

He becomes the first Allied soldier to die in the assault when he is hit in the neck by machine gun fire.

US paratroopers land with the aim of securing the town of Sainte Mere-Eglise, which is on the main road to Cherbourg which is the first French town to be liberated after hours of fighting.

Allied warships start to open fire on the German sea defences with HMS Warspite firing off a broadside which marks the British and Canadian assault on Juno, Sword and Gold Beaches.

US forces land on Utah and Omaha Beeches and come under fire from Nazi troops.

By around midday commandos and troops finally reach the key bridges after heavy fighting to meet up with the paratroopers.

He tells MPs: “During the night and the early hours of this morning the first of the series of landings in force upon the European continent has taken place.”

He added: “Ray ran back into the water. He dragged out one man after another.

“He was shot through the arm. His leg was ripped open by shrapnel. His back was broken. He nearly drowned.

“He had been on the beach for hours, bleeding and saving lives when he finally lost consciousness.

“He woke up the next day on a cot beside another badly wounded soldier. He looked over and saw his brother Bill.

“Ray, the free world salutes you.”

Mr Trump  met some Brit veterans yesterday from the campaign and came face-to-face with the spirited 93-year-old vet Thomas Cuthbert who laughed “if I was 20 years younger” as he shook 49-year-old Melania’s hand – right in front of husband Donald.

After chatting up the First Lady, Trump jokingly replied: “You could handle it, no question!”

Trump added: “It’s my honour, believe me, thank you very much.”

Prince Harry also made a touching tribute during the 75th anniversary events.

‘KIDS COULD HAVE DIED’

DON’T BE A SUCKER

The 34-year-old today visited Royal Chelsea Hospital, taking time out to speak with six veterans who had been involved in the Normandy Landings in 1944 during the review of the annual Founder’s Day Parade.

May paid tribute to the “ultimate sacrifice” made by the soldiers who stormed the beaches 75 years ago.