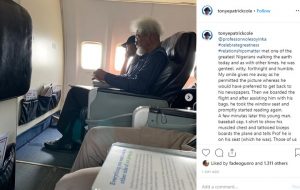 Recall, it was revealed on Wendy Williams Show that Tonye was the African Prince, the Real Housewives of Atlanta, Kenya Moore had been telling everyone she is dating when in fact the businessman was actually very married with kids.

N6 also reacted to the report of the young man who asked Prof. Wole Soyinka to vacate the airplane seat allotted to him.

Tonye Cole shared a viral story of a young man who requested that the Nobel Laureate vacate his seat while on the flight, had accused him of being disrespectful to him today June 24, 2019.

However, N6 who reacted to the post called out Tonye Cole who demanded for respect to Prof. Wole Soyinka, as he accused him of not observing same when he disrespected his wife with Kenya Moore till it got to the Wendy Williams show.

So long as the Young Man was Not Disrespectful he has all Right to Request to be Placed in His Original Seat. TonyeCole that is Talking, when he was Disrespecting his Wife with Kenya Moore till it got on Wendy Williams nobody wrote Thread for Him that time o 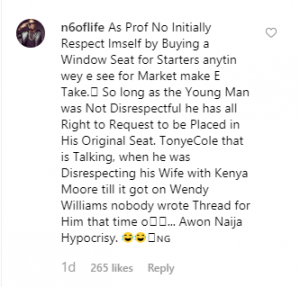 Upcoming Act, Chigratt Accused Of Stealing ALL The Songs Compiled In His Albums

Chigratt An upcoming act, Chigratt has been called out on Twitter over copyright infringement. According