Nigerian cross-dresser Bobrisky has put her former business partner on blast. Taking to her IG page, Bob called out a certain Rosemary whom she claimed suggested that they work together on lashes but ended up being too greedy. Read Also: His Face Was Full Of Rashes And He Flew Economy – Social Media User Calls Outs […]

Taking to her IG page, Bob called out a certain Rosemary whom she claimed suggested that they work together on lashes but ended up being too greedy.

”I really don’t wanna talk about dis because my lawyer said I should ignore…. last year January a woman called rosemary came to my dm that she wanted us to work together. She said we should produce lashes together. She said majority people go to Vietnam 🇻🇳 with their passport to collect good on credit. That d production company give them good on credit while they come back home (NIGERIA ) to sell d good and return d money to d company in Vietnam. I responded, that I cannot collect any goods on credit. When am ready I will go to d company and pay them get my goods. She responded that she lives in Vietnam 🇻🇳 she can get d good on credit with her name while i sell it in Nigeria 🇳🇬. D agreement was 50/50 after sales. So I went ahead to draft d lashes package 📦 and how I want d lashes to be produced in my name. Rosemary said if we sell 20,000 lashes our gain is 5,000,000. Meaning we are both going to share d money into 2 2,500,000. When d lashes came in I went to meet all my celebrity friends @tontolet @dabotalawson @halimabubakar @anitajoseph8 to pls help post dis lashes on their page so we can sell fast. You all saw how I work so hard to push dis brand. I paid for all d shoot for dis lashes from my pocket without asking Rosemary for any funds since we are both sharing d profit together. Some of my distributors don’t even send their shipment money compete, but I will use my money to compete their shipping goods. Most of our customers are from Uk, India 🇮🇳 Dubai, Angola, South Africa, Germany? Ghana. You all saw how I work so hard to push dis brand. From d first batch of lashes I sold 18million all money was sent to rosemary account bob wings. I don’t have access to that account.Nobody know about dis. Not even @tontolet know about dis cos I kept it so discreet. When d second lashes arrived it was closed to my birthday last year. I was running around to plan d party. Rosemary was so greedy that she kept calling to me to post d lashes. I told her to calm down that I have a party to plan. My birthday did not later hold, I was so down and sad. Rosemary was still calling for me to post that she need money so urgent. Read d part u on my next post.” 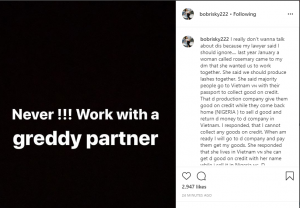 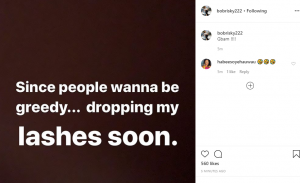 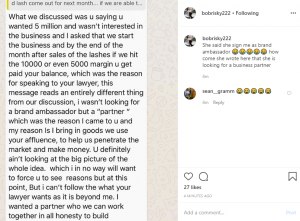 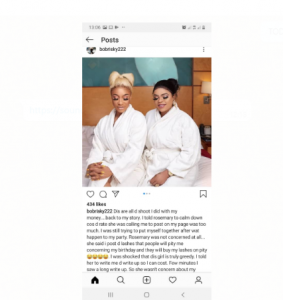 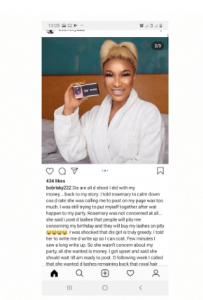 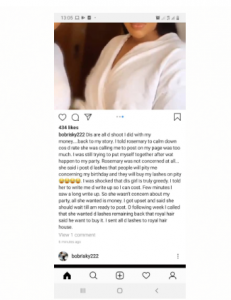 Cooking Is Not For Me – Toke Makinwa

Controversial OAP, Toke Makinwa has made it known she is not a big fan of