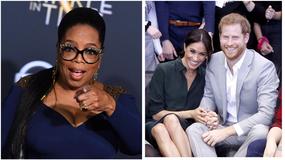 Oprah Whitney washes her hand over the rumours that she was behind Prince Harry and Meghan Markle's royal family split decision.

Oprah Whitney washes her hand over the rumours that she was behind Prince Harry and Meghan Markle’s royal family split decision.

Oprah Whitney has come out to blatantly deny that she advised Prince Harry and Meghan Markle to step back as senior members of the royal family.

The media mogul made this known while answering questions from PEOPLE. According to her, they don’t need her help to make any personal decision.

“Meghan and Harry do not need my help figuring out what’s best for them. I care about them both and support whatever decisions they make for their family,” she said.

Oprah’s statement is coming hours after PageSix published an article that insinuated that she was the one who advised the couple to set back as senior members of the British royal family. The report also claims that Winfrey encouraged the couple to move to America and build their brand.

The report also indicates that Harry and Meghan also got some advice from some of their famous friends like the Obamas, and George and Amal Clooney (Who were present at their wedding).

It would be recalled that about 48 hours ago, Prince Harry and Meghan Markle shocked the world when they announced their plans to step down as senior members of the royal family.

The couple announced the shocking news via their official Instagram page on Wednesday, January 8, 2019. According to them, they would be stepping aside a d moving to North America.

“After many months of reflection and internal discussions, we have chosen to make a transition this year in starting to carve out a progressive new role within this institution. We intend to step back as ‘senior’ members of the Royal Family and work to become financially independent while continuing to fully support Her Majesty The Queen. It is with your encouragement, particularly over the last few years, that we feel prepared to make this adjustment.

“We now plan to balance our time between the United Kingdom and North America, continuing to honour our duty to The Queen, the Commonwealth, and our patronages. This geographic balance will enable us to raise our son with an appreciation for the royal tradition into which he was born, while also providing our family with the space to focus on the next chapter, including the launch of our new charitable entity,” they wrote.

Finally, the Duke and Duchess of Sussex revealed that moving on, they will continue to work with the royal family.