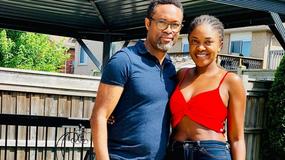 You've got to read the message Omoni Oboli sent to her husband as they mark their 19th wedding anniversary.

You’ve got to read the message Omoni Oboli sent to her husband as they mark their 19th wedding anniversary.

Omoni Oboli and her husband, Nnamdi are celebrating their 19th wedding anniversary today and she has some really cute words for him.

The actress and movie director took to her Instagram page on Monday, October 28, 2019, where she shared a photo of herself and her hubby with one of those captions that would leave the single guys with the famous quote ‘God When?’

“Do you know what today is? It’s our anniversary 🎶💃🏻💃🏻💃🏻 My boyfriend, my lover, my baby daddy, my husband, my best friend 😍😍😍 Happy anniversary bestie @nnamdioboli. It’s been 19 years of you loving me unconditionally. Only you can be who you are to me. I’d go a 100 more years with you my forever love. God was looking out for me when he sent you to me. I love you to infinity and beyond 😍 PS: I couldn’t have picked a better day to kick off my new business. Announcing soon but first #Omonifam. Help me bless God for sending me an almost perfect man 🙏🏾❤️🙏🏾,” she wrote.

Happy anniversary to the Obolis from all of us at Pulse. Omoni Oboli and her husband, Nnamdi are blessed with three sons.

We’ve become used to the style and kind of messages celebrities send to their spouses doing special events like anniversaries and birthdays. These guys always have a way of going all poetic or sometimes hilarious and we loveeeeee every bit of it.

IK Osakioduwa marked his eleventh wedding anniversary a few weeks ago and had so many nice things to say about his wife, Olohi. According to him, there is no woman on earth that he would trade for her.

“It’s been 11years! Like most couples, we’ve had our ups and downs, but I can say confidently that there isn’t a woman in the world that I would trade @kidskulture with. HOWEVER, if @sofiavergara @salmahayek @kellyrowland or @kerihilson would like to fill in for you MOMENTARILY (just briefly oh), then I’d be willing to let you get a brief marriage holiday. 😁 (Just so you can rest from my stress of course. It is not about selfish desire) Happy 11th anniversary Baby. #MyRideOrDie #MyAlwaysAndForever #TheColouredHairGirl,” he wrote.