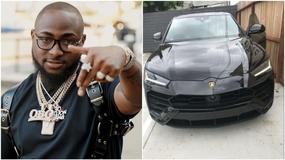 Davido has announced the acquisition of a new wonder on wheels, Lamborghini Urus, which is valued at a staggering $200,000.

On Sunday morning, August 25, 2019, Davido took to his Twitter to ask his fans and followers if she should ship the new vehicle to Nigeria or keep it in his Atlanta garage.

Davido’s latest car acquisition makes it the last in 2019 after he went on a car shopping spree for members of his 30BG.

On Thursday, March 7, 2019, Davido announced that he was picking out whips to reward his crew, and Lati was supposed to be the last to get his own.

Lati’s gift pack reached him a few days after when he took to Instagram to thank the singer for being so generous with a new red Benz worth N70 million.

Also, another member of the 30BG, Aloma was rewarded with a Benz worth several millions of Naira in March 2019.

Davido’s second baby mama, Amanda is taken to her Instagram story to explain the disturbing

Popular Nigerian singer, Brymo has taken to social media to address a title that has