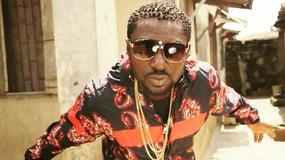 Blackface in a recent interview with Max FM, threw shades at Tiwa Savage.

Blackface in a recent interview with Max FM, threw shades at Tiwa Savage.

Blackface is in the news again and this time around he appears to be shading Tiwa Savage.

The music star and former member of the defunct group ‘Plantashuz Boyz’ while granting an interview with Max FM made some comments which from all indications were pointed towards Tiwa Savage. According to him, some singers have started making lyrics which aren’t reasonable.

“What I noticed over the years is that the lyrics became flimsy and some people lost their sense of belonging, sense of who they are. Because I started hearing some ladies do some song like not really going well with how you want to hear a lady talk like. When a lady is telling you somethings that really don’t count s’o ma gbe mi lo’le, will you gbadun my waist…i just think the ladies and the women should come up with reasonable lyrics,” he said.

Another interesting part of the interview was when he was a bit incoherent when asked about his kids and their age difference.

One thing we know for a fact is that Blackface has never been shy to call out other celebrities. Recall that about five months ago, he called former band member 2Face Idibia, gay.

The veteran singer revealed this during an exclusive interview with blogger, Linda Ikeji. According to him, it is only normal in the music industry to call someone names when ‘dissing’ them.

“Yes, I called him Gay, its a normal thing in music when you are yabbing someone, people have been doing it for ages. I can abuse his mother and say anything its normal,” he said. He was also asked why he decided to release a diss song even though there was a pending court case.

“Having a case in court doesn’t stop me from doing music. He has the same case in court and he’s been taking secret shots at me with his ‘Oyi’ and other songs, so it’s not a problem at all. I’ve always said it that if and when I want to yab 2face I’ll call him out directly, I’m not like him that’s been taking secret shots at me for ages. Go and listen to ‘Oyi’ he’s taking shots at me but he’s using the Idoma language to confuse you, people, that its a love song ‘Oyi’ is used to refer to a male in his language. If you also listen to his song ‘Only Me’, the line ‘i no say no be everybody sabi play ball’ line is also directly a shot at me. If he’s bold enough, he should grant an interview to address the issue but he won’t’,” he said.

Blackface’s comments came a few days after he dropped a song ‘War’ which have been widely seen as a diss song towards his former group member, 2Face Idibia of the defunct Plantshun Boiz.