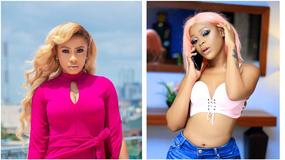 Mercy and Ike of Big Brother Naija have been called out by Tanzania singer, Kiki N Gigy.

Mercy and Ike of Big Brother Naija have been called out by Tanzania singer, Kiki N Gigy.

Tanzania singer Kiki n Gigy has called out former Big Brother Naija housemates and couple, Ike and Mercy over their constant side talk about her.

The singer made this known via her Instagram live on Thursday, January 9, 2020. According to her, Ike was just her babysitter for her right before he hit fame. He went on to call out Mercy for sending people to troll her.

“I don’t give a f**k…that bitch that n**ger…when he is sleeping his nose is like this (gives a descriptive look) Yo he was a baby seater to me, I have been a boss, I have always taken care of men, no man takes care of me. I have my own life, I have my own crazy mind, I don’t give a f**k. You should know that I became famous because of my craziness so I want to tell you, what do they even call her, she is not even a Lamborghini, shes a Vert because a bitch who has a mind and common sense would not send people to talk shit about somebody else,” she said.

It didn’t end there as she went to brag about giving Ike fame before he ever met Mercy and appealed to the winner of last season’s edition of Big Brother Naija to stay away from her life.

“Come by yourself bitch, talk to me. You win because you are crazy right? I don’t depend on Biggie Brother, I dint want to be on Biggie Brother, I have my own Biggie p**y. When that N**ga came to Africa, I have been taking care of him if you don’t know, I gave him fame before that miss come over. So stop mentioning my name on that m**da f**ker page,” she concluded.

Ike and Mercy are yet to respond to Kiki n Gigy’s claims but we will continue to monitor the story as it develops. It is not clear why the singer would be attacking Ike and Mercy at the same time because she had previously announced that she was single.

The reality TV star made this known via her Snapchat page on Tuesday, December 31st, 2019. In a short but direct post, the beautiful reality star announced her arrival into the singlehood association.

“Single not searching,” she wrote.

Okay guys, calm down before we all explode with questions about her love story with former housemate, Ike. We also wonder what might have gone wrong with their beautiful relationship.

I Tested Positive For Coronavirus 2 Weeks Ago – Singer Pink

American singer, Pink just announced that she tested positive for Coronavirus two weeks ago. According

Music executive, Ubi Franklin has accused reality star, Tacha of attacking him because he couldn’t

Cooking Is Not For Me – Toke Makinwa

Controversial OAP, Toke Makinwa has made it known she is not a big fan of