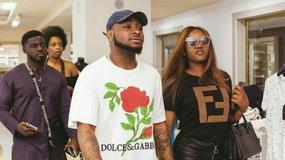 All you need to about Davido’s customised engagement ring for Chioma.

All you need to about Davido’s customised engagement ring for Chioma.

Davido proposed to Chioma on Thursday night, September 12, 2019, but not much is known about the customised ring.

Pulse findings revealed that the customised ring was purchased in a jewelry store, Diamonds by Dorgu, on Hatton Garden, London.

The investigation also revealed that Davido had chosen the ring store because the store deals in bespoke engagement and wedding ring.

It was further revealed that the engagement ring, which has ‘Assurance’ engraved in it, was designed with the assistance of Chioma and Davido’s friends, who had their input into the making of the diamond-encrusted engagement ring.

While the exact cost of the engagement ring was not disclosed, it was gathered that an average diamond ring on a regular store on Hatton Garden is put at over N3.6 million (£8,000).

Pulse further discovered that the bespoke engagement and wedding ring store is owned by a UK born Nigerian, Timi Dorgu.

Timi Dorgu, the owner of the diamond engagement ring store emerged the winner of the 2014 Black British Business Awards after working at L’oreal in London.

Tonto Dikeh Addresses Those Feeding Her In Dreams (Audio)

Media personality, Daddy Freeze, has fired back at Pastor Adeboye after the cleric took to

Nollywood star, Regina Daniels has finally taken to her Instagram page to confirm the news

Celebrity photographer, Busola Dakolo had a recent interview with Media Room Hub magazine where she